As we delve into 2020, marketing strategists from all over will need to consider the current trends and upcoming projections when deciding how to invest time and money. To help aid marketers who are tackling this task, we’ve put together a comprehensive list of all the statistics you need to know in order to understand the current social media landscape.

Before we get into the thick of it, there are a few aspects of social media as a whole to be aware of. One significant change affecting most channels is the ease with which people can shop. Ads with CTAs to ‘Shop Now’ or ‘Buy Product’ are becoming more and more visible on Facebook, Instagram and Pinterest. The folks at Instagram have even said that more that than 130 million users tap an image to reveal product details.

Another must-mention is Instagram’s huge ‘hidden likes’ move. In a social media world filled with influencers and micro-influencers, this decision came as something of a revelation. Starting in the US, it’s likely that the number of likes will be hidden across the board in an effort to tackle social media pressures and mental health.

Facebook also had its fair share of limelight in 2019, but for the wrong reasons – data breaches. In April it was announced that the data of millions of users – in fact 540 million records – had accidentally been ‘exposed to the internet’. Then, in September, 419 million users’ phone numbers were mistakenly leaked. 2019 was quite a year for Facebook, as Mark Zuckerberg was called in and out of Supreme Court, and the company was charged a $5 billion fine.

In 2019 the world of social media saw a few fun and unexpected events:

Looking at the evidence, it’s clear that Facebook is still firmly in the lead as a popular social media platform, at 2.41 billion active users.

Over the years, their viewers have grown steadily. Take a look at their average monthly users each year, over the last decade: 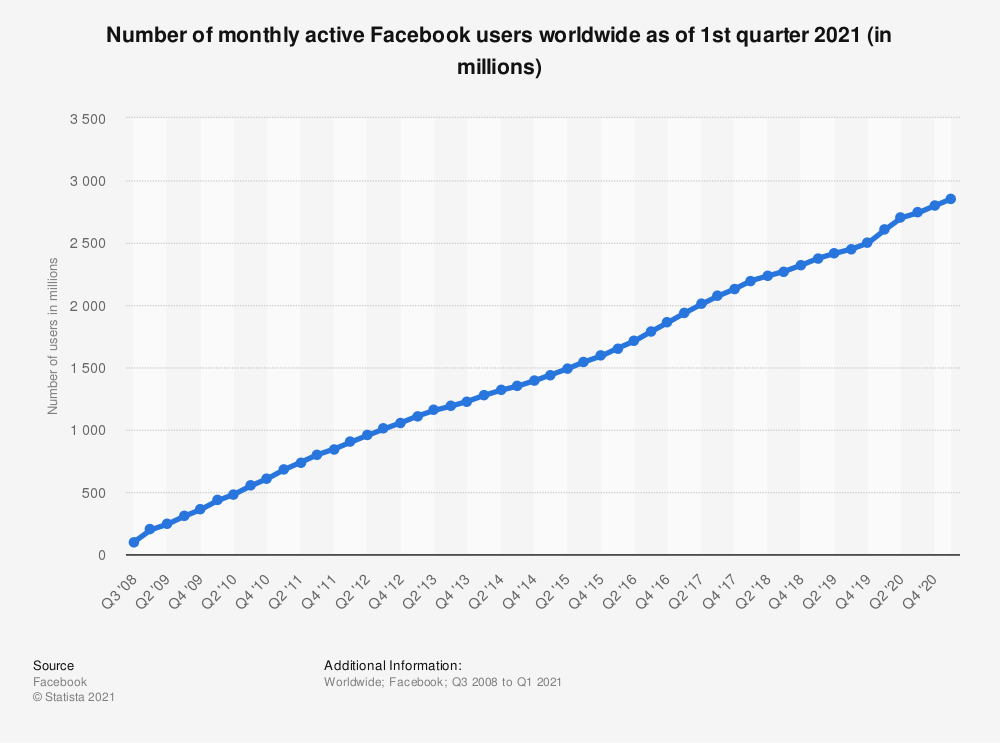 Facebook’s continued growth illustrates the fact that it’s still worth investing time and money into Facebook marketing. In spite of its age, the platform is far from dwindling in popularity.

This year, in addition to the big four, there are a few more social media platforms to consider using.  One to watch is certainly TikTok. Launched in 2016 in China, it was released to the rest of the world in 2017. By the beginning of 2019 it was the most downloaded app on the Apple Store – with 33 million downloads in just three months. It’s essentially an app with which users can share short videos, using music and filters, similar to Twitter-owned Vine.

The growth of TikTok is indicative of an overall trend; that is the rising trajectory of video content. With shorter attention spans and a need to convey information quickly, it’s no surprise that a significant proportion of social media users are engaging more with videos than other content. In fact, 56% of all internet users watch videos on Facebook, Instagram, and Twitter.

Armed with knowledge about the current trends in Social Media, it should be possible to define a well-thought-out and effective marketing strategy for 2020. The trick is to stay on top of the most recent changes and developments, and always be ready to adapt as necessary. Understand more about how to use social media in the most valuable way by learning about the rise of micro-influencers, and how to adapt to Instagram’s ‘no-likes’ change. Stay tuned to our blog page for more.